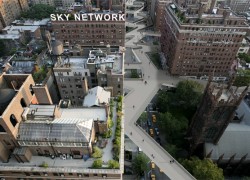 According to the plan, the multi-layered bridge system would be attached to surrounding buildings, allowing the city to grow vertically with time.  While improving pedestrian flow, the lightweight structure would have motion sensors to light up the street below.

Part of an international competition, the project is currently on exhibition at the New York City Museum until July 15. The project was recently submitted in the International Ideas Competition: The Greatest Grid organized by the Architectural League, involving 120 projects from 22 countries.

Last year Tiago Barros proposed a plan for future transportation involving a giant inflatable cloud, a reminiscent of the old Zeppelins or “Passing Cloud” to float travelers to their destinations. 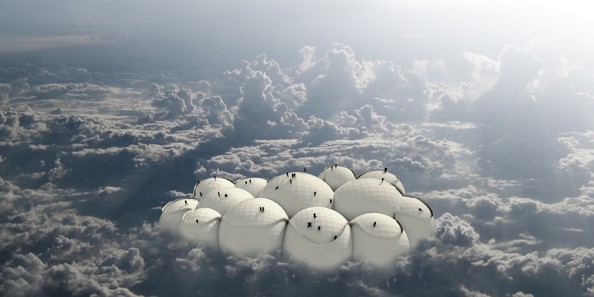 Barros proposed the design for a transport network of floating clouds in the sky to the Van Alen Institute and the Department of Cultural Affairs of New York City, for their international “Life at the Speed of Rail” competition.

Currently based in the United States, he works with New York City nARCHITECTS. He has worked as a Design Architect for Davis Brody Bond in New York and was part of the World Trade Center Memorial Museum team.

Previously he worked in Lisbon with Aires Mateus in projects such as the Park Hyatt Hotel in Dublin and the Library and Central Archive in Lisbon.

He has also worked with the Research and Development – Advanced Modeling team at Aedas Architects in London where he participated in various projects, such as the Abu Dhabi Investment Council Headquarters in Abu Dhabi.