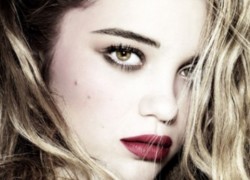 Portuguese American performer Sky Ferreira,19 years old, is definitely a star on the rise. Song writer, model and actress, Ferreira has just released “99 Tears” — her new lyric video — and her new EP “As If!” on iTunes.

About her multi-ethnic identity she recently revealed “My dad is Brazilian and Portuguese and my mom is Native American. It’s funny because I came out looking like, pretty white”  — said Ferreira — “I’m Caucasian-looking and none of my family is; everyone in my family is at least two shades darker than me.”

Born in 1992, Sky Ferreira got her start in her hometown of Los Angeles on MySpace.  She began playing Elton John songs on the piano at nine years old, sang gospel songs in church and at age 13, and took opera lessons to improve her vocal talents.

After attracting the attention of Swedish producers Bloodshy and Avant via a song posted on MySpace, the first singles, “One” in the U.K., and “Obsession,”  were later used on the soundtrack to “The Vampire Diaries“, in the U.S. , and released in 2010.  She has also modeled for Nylon, Vogue Italia, Vs. Magazine. Tommy Hilfiger Denim and Calvin Klein’s ck.