Accused: Sir Cliff Richard a villain or a victim? – By Len Port 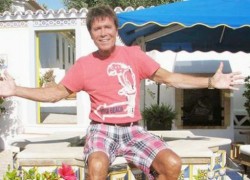 Sir Cliff Richard has maintained a low profile in Portugal this week while preparing for a return to Britain to face police questioning about his alleged sexual assault on a young boy.

Many thought it almost inevitable that Sir Cliff would one day be investigated for alleged child abuse and yet when the news broke it came as a shock.

The allegation of sexual impropriety was quickly eclipsed by a scandal in which investigating police and the BBC have been accused of collusion and orchestrating a public spectacle that has been branded a ‘witch-hunt.’

Sir Cliff, who was relaxing at his holiday home in the Algarve, suddenly found himself named and shamed globally because of a single complaint from an unknown individual about an as yet unverified assault nearly 30 years ago.

The way in which the police and media have handled the matter remains highly questionable. Serious ethical questions have been raised.

For starters, should someone be publicly identified by the police and have their name splashed on TV and in newspapers before they have even been interviewed let alone charged?

Gossip about the singing star’s sexuality had been rife for decades, of course. And since the outpouring of revelations about Jimmy Saville, Rolf Harris and other entertainers, the Internet has been abuzz with suggestions that Sir Cliff would sooner or later be exposed as a pedophile. 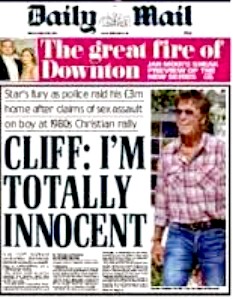 The shock news hit the headlines last Thursday (14th August) with a live-on-TV police raid on Sir Cliff’s Berkshire home. When eight plain-clothed police officers arrived in five unmarked cars to search Sir Cliff’s penthouse property within a gated community, a BBC helicopter was already hovering overhead and another camera crew was at the front gate.

The BBC led with a report that the search, which lasted five hours, had been instigated by an alleged historical sex offence involving a boy under the age of 16.

Just a few hours before the raid, Sir Cliff had left his Algarve vineyard estate and travelled to the Alentejo with his youngest sister, Joan Pilgrim. They returned the next day.

By then Sir Cliff had described the sexual assault allegation as “completely false” and expressed anger that the police had apparently alerted the press before contacting him.

The following day, the galloping story of the search and assault claim appeared on the front page of most of Britain’s national papers and in many others around the world. Most people on the planet not otherwise preoccupied by a nearby war were soon aware that the iconic singer was in big trouble.

Trolls galore rushed to make asinine comments on social media. Droves of devoted fans countered with expressions of support on Facebook and Twitter, but it was already too late. As the saying goes, mud sticks.

What exactly had Sir Cliff done to deserve all this? It was far from clear, but obviously the media had enthusiastically latched on to the fact that Sir Cliff is famous and in danger of becoming infamous.

Apparently the allegation against him came from a man in his 40s who had watched a TV documentary about Jimmy Saville and then contacted the producer of the program, the investigative journalist Mark Williams-Thomas. The allegation and other information was duly passed on by Williams-Thomas to Metropolitan Police Service detectives conducting the Operation Yewtree sexual abuse inquiry.

Last weekend the South Yorkshire Police revealed they had been contacted “weeks ago” by a BBC reporter who had found out about their supposedly highly confidential investigation into Sir Cliff’s alleged assault, said to have taken place in 1985 at an event in Sheffield that featured the US preacher Billy Graham.

The South Yorkshire Police said they had been “reluctant” to co-operate with the BBC, but believed if they did not the BBC would run the story anyway, potentially jeopardizing the police investigation.

So the police struck a deal whereby the BBC was given exclusive information in advance of the Berkshire raid in return for delaying publication of their story.

Amid a flurry of reported denials, claims and counter claims from both the police and the BBC, Keith Vaz, chairman of the House of Commons home affairs committee, said: “The police have a duty to act with fairness and integrity. Incalculable damage can be done to the reputation of individuals in circumstances such as this.”

Former attorney general Dominic Grieve called the police’s handling of the case “odd.” A prominent human rights lawyer, Geoffrey Robertson, questioned both the judgment of the BBC and legality of the search warrant used by the police.

Former home secretary David Davis said the “extraordinary decision” of the police to allow filming outside Sir Cliff’s home demonstrated that there is “something sick at the heart of Britain’s police and justice system.”

The police condemned the live coverage in an official letter of complaint to the BBC’s director-general, pointing out that the corporation appeared to have contravened its own editorial guidelines.

Despite all the huffing and puffing, the police expressed gratitude for the press publicity on the search because it resulted in a number of people coming forward with further information. They would not say whether the callers included more alleged victims or potential witnesses, but the plot was thickening.

So far, the police and the media had blackened a person’s name even though that person had not been confronted with any evidence of wrongdoing or given an opportunity to properly respond.

While being buoyed by a tight coterie of friends and advisers, Sir Cliff’s has had a visit from a highly-rated British solicitor, Ian Burton, whose legal firm has represented the likes of former Harrod’s owner Mohamed Al-Fayed, football manager Harry Redknapp, PR agent Max Clifford and TV celebrity Nigel Lawson. Ian Burton enjoys the reputation of being a particularly tough and canny lawyer adept at nipping criminal investigations in the bud.
____________