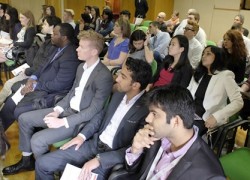 The Luso American Development Foundation (FLAD) is hosting a group of 46 US students and faculty from the University of Rhode Island (URI), the Johns Hopkins University (JHU) and the Rhode Island School of Design (RISD) participating in the ‘January Term 2016’, a study visit program taking place in Portugal January 5-20.

Organized by the Study in Portugal Network (SiPN) and sponsored by FLAD, the program opened with welcoming remarks by FLAD’s executive board member, Prof. Michael Baum, founder and director of the SiPN program. 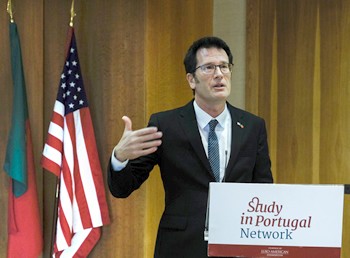 Other guest speakers included Allan Katz, former US Ambassador in Portugal; Mário Ferreira, president of the Douro Azul and member of the Board of Trustees of FLAD; and the Portuguese Ambassador Nuno Brito, Permanent Representative of Portugal in the European Union.

A group of students from the University of Missouri-Kansas City (UMKC) and a number of college students, refugees from Syria, studying in Portugal with FLAD’s support, were among the participants.

Later in the day, the visitors were guests at a welcoming reception in the private residence of US Ambassador in Portugal, Robert Sherman. The program includes visits to universities, private and public institutions, start-up businesses, and meetings with dignitaries in Lisbon, Porto, and Braga.

Launched in 2014, SiPN’s main goal is to encourage North American students, including students of Portuguese descent, to choose Portugal as an academic destination. Starting in 2016, and thanks to FLAD’s partnership with the Fulbright Commission in Portugal, SiPN alums who are selected as finalists for the Fulbright award to Portugal will receive priority, thereby improving their odds of being selected. Other partial scholarships for the SiPN program are also provided by FLAD each session.

The number of US students who chose Portugal to study grew from only 197 in 2013/14 to 319 last year, a nearly 62% increase. In its first year alone, SiPN will bring 82 students to Lisbon and many more to the Azores through FLAD’s Crossing the Atlantic mobility program, including SiPN’s summer internship program.