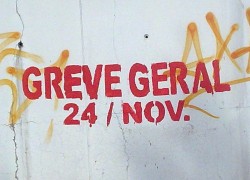 Many thousands of workers are expected to participate in the general strike called for next Thursday by CGTP and UGT the two largest Portuguese labor union confederations.

Demonstrations are planned in many cities on strike day, with attention centered on a march and rally set for Lisbon, the capital.

Union leaders and 15,000 union activists have been involved in about 9,000 preparatory meetings with workers to organize the general strike called last month, Lusa news reported.

CGTP official Arménio Carlos told Lusa Tuesday that demonstrations and rallies would be held in all 20 district capitals and in 14 other towns and cities.

The biggest street protest was expected to take place in Lisbon, where scores of thousands were awaited for a downtown march ending at parliament’s Sao Bento palace.

The shutdown is a protest against the newly proposed government austerity budget measures for 2012 and 2013 submitted to parliament earlier in the month by center-right Prime Minister Passos Coelho.

Several unions representing aviation workers announced Friday they will join the general strike disrupting travelling. Portuguese airport operator ANA said passengers expecting to fly after 10:00pm on November 23 or any time the next day should contact their airline or travel agent before heading to any Portuguese airport.

The national shutdown for November 24 is the third general strike since Portugal regained democracy in 1974 and only the second time the CGTP and UGT organized a joint strike.