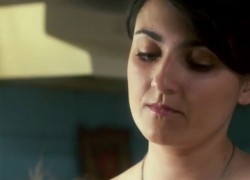 The film narrative, set in the 1980’s, is a supernatural-psychologic thriller that tells the story of Celeste (Joana Pais de Brito) an immigrant superstitious woman dealing with guilt, faith, marriage and adultery.

When her husband Carlos (Dinarte Freitas) finds out about Celeste’s cheating, he takes advantage of her beliefs and superstitions to try and drive her crazy.

The 30 minute short film, shot entirely in the United States, but spoken primarily in Portuguese, was presented as an official selection at the Manhattan Film Festival, June 23.

Some of the best professionals in the industry have worked on the film, including composer Matt Robertson (“Quantom of Solace,” “Sucker Punch”) and colorist Tim Stipan (“Black Swan,” “Vicky Christina Barcelona”).

Currently the film is being submitted to film festivals around the world . It was  feature at the at the Lucerne International Film Festival Showcase (Switzerland) in 2011. The production was funded through by the director and through crowd-funding via the website Kickstarter.

The film was shot by cinematographer Daniele Napolitano and produced by Manuel Moniz and Gillian Appleby. Director José Maria Norton and some of the cast will be present at the screening.