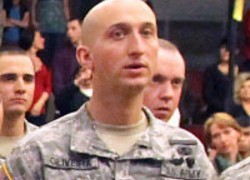 Born in Samel, Anadia, mainland Portugal, he emigrated to the United States at age of 7 to Newark, NJ. He is survived by his parents, Manuel and Armanda Oliveira, and a brother and sister. According to a family source he was scheduled to return home at the end of the year. The funeral is scheduled for Monday, October 24.

Oliveira was conducting reconnaissance along a road in Yahya Khel in Paktika Province when the explosive device detonated.

He was assigned to the Security Forces Platoon of the 2nd Battalion, 113th Infantry of the New Jersey Army National Guard. The Riverdale-based unit deployed to Afghanistan in June.

The unit is assigned to the Sharana Provincial Reconstruction Team (PRT), which is assisting the Afghan government establish the law and order and economic and social development in the region.

Maj. Gen. Glenn K. Rieth, New Jersey’s adjutant general, met Oliveira and other members of the unit during their pre-deployment training at Camp Atterbury in Indiana in April.

Rieth described Oliveira has one of the most seasoned non-commissioned officers on the deployment, having served on a detainee operations mission to Guantanamo Bay, Cuba, in 2004, in response to Hurricane Katrina in New Orleans in 2005 and a year-long combat tour in Iraq in 2008-2009. 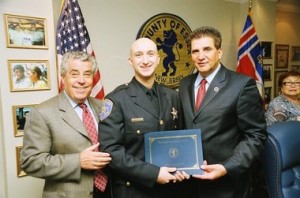 Oliveira was also an 11-year veteran of the Essex County Sheriff’s Office in New Jersey. He was serving a year-long tour, his third with the New Jersey Army National Guard, said military officials.

His first tour was in Iraq, in 2008. He had joined the National Guard in 2003, after having served three years on Army active duty beginning in 1997.

Jorge Miguel Oliveira had been recognized with the National Defense Service Medal, the Armed Forces Expeditionary Medal, the Global War on Terrorism Service Medal, and the Iraq Campaign Medal with Campaign Star. He had also earned the Expert Infantryman Badge and the Air Assault Badge.