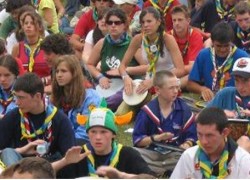 JOTA-JOTI 2012 Logo Contest, which took place over March-April, involved 142 entries received from 34 countries. The theme was “How big is your world?”

The jury consisted of 10 JOTA-JOTI volunteers and World Scout Bureau staff members, notably including the Secretary General of WOSM, Luc Panissod, the World JOTA-JOTI Coordinators – Richard Middelkoop & Holger Sickenberg, and David Markwell & Dave Ross from the World Scout Shop, the sponsor of prizes for the winners.

The mission of Scouting is to contribute to the education of young people, through a value system based on the Scout Promise and Law, to help build a better world where people are self-fulfilled as individuals and play a constructive role in society. Read more >>

For further details on the Contest and to see the logos that made it to the shortlist, visit the Contest’s Facebook Page