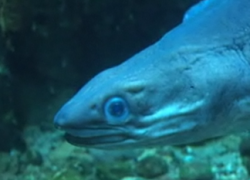 After a lifting operation involving a crane, a 6ft male conger eel has been released into the wild so he can find love in the deep waters of the Azores where, hopefully, he will find a mate to reproduce.

The conger eel, called Rip, left Macduff Marine Aquarium in Aberdeenshire, Scotland, to swim an estimated 2,000 miles to the Atlantic. Rip has been at the aquarium since 2004.

Claire Matthews, the aquarium manager, said: “We hope Rip makes it to the Azores, but of course the sad part of the story is that he will die after it all – but at least he’ll be happy.”

The eels are known to congregate in deep water, where they spawn before dying. Operation Rip Tide was carried out on Monday of last week.

In 2001, Chippie the conger eel was released at the aquarium for the same journey in Operation Amour.

Conger eels are common in coastal waters around Scotland and mature between the ages of five and seven.

When they are ready to breed, the eels stop eating, lose their teeth and begin a long migration south to an area in the Atlantic between the Azores and Gibraltar.