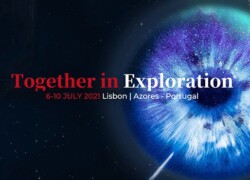 The Azores will host the Global Exploration Summit 2021 (GLEX), between July 6-10, which opens in Lisbon and closes on the island of São Miguel.

The GLEX Summit, under the motto “explore and learn”, is part of the celebrations of the 500 years of the circumnavigation voyage of Portuguese explorer Fernão de Magalhães (1480-1521).

The event is co-organized by Expanding World (Portugal) and the Explorers Club (New York), in association with Turismo de Portugal, the Azores Tourism Association (ATA), and the Government of the Azores.

The event, which will be will be broadcast around the world on GLEX Summit’s own digital channels, will feature renowned scientists and explorers such as: Nina Lanza, NASA’s lead team in charge of the Perseverance Rover on its voyage to Mars; Richard Garriott, astronaut, and new president of the Explorers Club of New York; Alan Stern, NASA astrophysicist and aerospace engineer; Ricardo Conde, president of the European Space Agency; and Brian Cox, one of the BBC’s best-known science program hosts.

American laureate poet, Amanda Gorman, known for having read a poem at the inauguration of US President Joe Biden, will also participate.

The oceans will be the central theme, with the participation of Fabien Cousteau, who will present his latest PROTEUS project, dedicated to state-of-the-art marine research.

In addition, more than 20 panels will address cutting-edge technology and innovations to propel the world toward the next frontier of exploration, such as space and ocean exploration, polar exploration, the conservation of natural sanctuaries, the environmental sustainability of the planet, climate change and extreme phenomena, and protecting the planet, animal species and natural resources.

The exploration of Mars will be another highlight of the GLEX Summit, featuring the world premiere of the new European Space Agency exhibition “Mars Beyond”, which will bring to Lisbon the technology of space exploration, namely some equipment and vehicles that will contribute to a better knowledge of Mars.

The first edition of the Global Exploration Summit, held in Lisbon, in 2019, brought together 1,200 participants from 5 continents and about 20 nationalities.