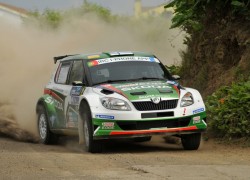 The SATA Rallye Azores, scheduled for February 23-25, is the first round for the 2012 Intercontinental Rally Challenge (IRC).

The 2012 IRC will get off to a spectacular opening round with a street stage of the 13-event all-action international series.

On its 7th season, the IRC consists of thirteen rounds and will end on 3 November, at the FxPro Cyprus Rally. The event has been part of the IRC schedule since 2009.

“It’s very important for us, very important for all Azores, the government and the people to be the first round”, said Francisco Rosa Coelho president of Grupo Desportivo Comercial, the event organiser. “It’s an honor to open the IRC, we’re very expectant and we hope our success is the success of the IRC,” he said.

The opening city stage at the Praça Gonçalo Velho, in Ponta Delgada, will be compulsory for all IRC crews even though it won’t form part of the competitive itinerary.

“I’m really motivated to win this rally,” said Mikkelsen. “Of course it will be a great start to the year and great for SKODA UK if I do, but, after last year, I would really like to win this special event. It’s one of my favorite rallies with a really good atmosphere and amazing stages.”

SATA Rallye Azores has been part of the IRC schedule for the last three seasons. Previous winners include Kris Meeke, Bruno Magalhaes and Juho Hanninen.

The SATA Rallye Azores has been held for over 40 years and is one of the most important legs in the ground stage of the National Championship. Its rankings contribute to the European Rally Cup organized by FIA (the Fédération Internationale de l´Automobile).

Last year in July, the SATA Rallye Azores hosted more than 40 crews along some of the most beautiful roads in the island of São Miguel.

One of the most challenging rallies on the international rally calendar, the SATA Rallye Azores covers approximately 180 miles.