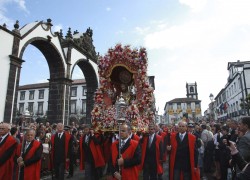 Thousands of Azoreans living abroad face ruined plans for the 2012 Santo Cristo Religious Festivities due to a labor dispute standoff with pilots flying SATA International and the SATA Group.

The “Festa do Senhor Santo Cristo dos Milagres” (Festival of Our Lord of the Miracles) is the largest religious celebration of the Azores, taking place in Ponta Delgada from May 10 to May 17. The dates for the feast overlap with the dates for the strike announced by SATA International for the second and third weeks of May.

The annual celebrations,  traditionally taking place on the 5th week following Easter or the 5th Sunday after Easter, will be presided this year by D. Rino Passigato, the current appointed Roman Catholic Apostolic Nuncio in Portugal.

Nearly 400 years old, the tradition attracts many thousands of Azorean pilgrims, mainly from the United States and Canada, flying home to participate in the religious events which culminate with a 6-hour long parade and a massive fireworks display. The festivities will be broast on the Internet.