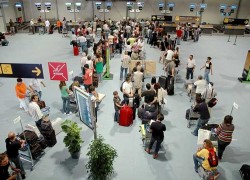 Maria João Ávila, one of the two elected Representative in the Portuguese parliament for the Portuguese citizens residing abroad, accused SATA Air Azores of refusing to address the issue of  “abusive airfare costs” charged by the airline to the Azorean resident communities in the United States and Canada.

Ávila made the remarks to Portuguese reporters in Montreal, Canada, during a press conference by Secretary of State for Emigration, José Cesário.

Maria João Ávila and José Cesário were in Canada last week for a four-day visit to the Portuguese resident community in Toronto (Ontario), Winnipeg (Manitoba) and Montreal (Quebec).

Ávila, an Azorean born immigrant in the United States, said that currently the party she represents – the Social Democrat Party (PSD) – is raising the awareness in parliament regarding the excessive costs charged by both the national carrier TAP Air Portugal and  the regional SATA Air Azores to the Azorean residents in the United States and Canada. Both carriers are state owned and state run airlines.

“The issue regarding TAP was presented in parliament on Friday [March 16] and has passed,” she said. “But SATA has refused twice,”  to address the issue, she added.

The high airfare costs, in addition to the fees charged by SATA for luggage handling, has been strongly contested by the Azorean resident communities in the United States and Canada.

The AEA (Association of Azorean Emigrants) has also denounced the situation. Recently, AEA has announced that it is working with SATA Air Azores with the objective of defending, supporting, informing and promoting the rights and interests of the Azorean emigrants, considering that SATA plays a role in providing air transportation to and from the Azores to the Azorean community living abroad.

The AEA is an independent institution based in the Azores which objective is to connect the Azorean diaspora with the homeland.  AEA is headquartered at the Museum of Azorean Emigration, in Ribeira Grande, São Miguel island.

Maria João Avila immigrated to the United States in 1970 and currently resides in New Jersey . She was the first US resident selected to serve as a Representative in the Portuguese parliament for the Portuguese citizens residing abroad.