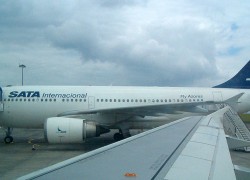 SATA International flights will be operating on every Saturday until 29 October 2011, with evening departures from London Gatwick and from Manchester to Ponta Delgada in São Miguel, the largest of the Azorean Islands.

The weekly direct flight departing from London Gatwick and Manchester to Ponta Delgada on São Miguel Island takes under four hours, with prices from under US$500 round trip – including taxes and charges.

Weekday flights are also available y from London Heathrow via Lisbon. SATA International also offers the most comprehensive inter-island connections throughout the Azores archipelago and prices start from under US$60 for each inter-island flight.

SATA International (full name SATA Internacional Serviços E Transportes Aéreos) is based in Ponta Delgada, Sao Miguel, in the Azores. It operates scheduled flights to the Madeira Islands, mainland Portugal and many destinations in Europe and North America, as well as charter flights.