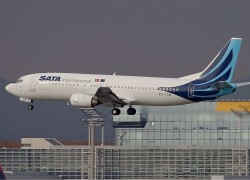 Another factor contributing for the loss was a decrease in revenue resulting from a decline in seat occupancy for SATA Air Azores flights from the mainland Portugal to the Azores and Madeira, following the sharp drop in consumer confidence due to the looming economic crisis, he said.

SATA Group is a state-owned airline company, under the jurisdiction of the Regional Government of the Azores. The group operates SATA Air Azores and SATA International.

SATA Air Azores is the regional airline based in the Azores. The airline operates a network of destinations across the nine islands of the Azores, Madeira and mainland Portugal. SATA Air Azores has served the Azores for more than 60 years.