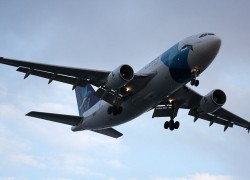 The Azorean airline SATA announced Monday it has formed a partnership with Canadian Westjet, the second largest Canadian airline. The goal is to provide more competitive rates on routes between the Azores and Canada. The partnership will take effect January 19, 2012.

Under the agreement, SATA International will be able to offer more flights between the Azores and Canada and to add new destinations in Canada from Toronto and Montreal to places like Winnipeg, Vancouver, Calgary or Ottawa and also in the United States to destinations such as New York, Miami and San Francisco.

In a statement to the press, Gomes de Meneses, SATA president, said the agreement with WestJet will also allow SATA to capture more traffic from the Azores to Canada which “will translate into savings of several hundred Canadian dollars for any family from Canada wishing to visit the Azores.”

According to Meneses, the agreement will “strengthen the position of the SATA in the international market through the establishment of strategic partnerships with companies of reference from the most important sources of tourism.”

He also revealed that SATA routes to the United States have increased 19.5% between 2009 and 2010, while connections with Canada, during the same period, showed an increase of 11.9%.

WestJet, with a fleet of 90 aircraft, operates in 71 destinations in North America, including 30 cities in Canada and 17 in the United States.

Following a recent agreement between SATA Air Azores and US Airways, travelers using SATA Air Azores can now purchase e-tickets to and from the Azores to new destinations within the United States including Chicago, Fort Lauderdale, Miami, Philadelphia, Orlando and San Francisco and New York.

SATA International has been connecting New England with the islands of the Azores year-round in the past two-decades and also operates longer-haul services to a number destinations in Canada and Europe. SATA International is the only commercial airline operating between the United States and the Azores.