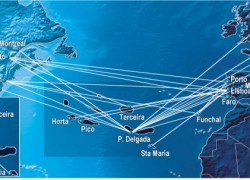 According to the new program, the Azores based airline will offer  two direct daily  flights from  Boston  to Lisbon each week — on Wednesday and Sunday — plus five additional flights from Boston to Lisbon via Ponta Delgada/São Miguel and one via Lages/Terceira in the Azores.

Direct flights from Boston to Lisbon take about five and a half hours, while flying from Boston to the Azores takes about four hours. SATA Air Azores Express is the only airline that provides nonstop summer service from Boston to Portugal.

Following a recent agreement between SATA Air Azores and US Airways, travelers using SATA Air Azores can now purchase e-tickets to and from the Azoresand mainland Portugal to new destinations within the United States including Chicago, Fort Lauderdale, Miami, Philadelphia, Orlando and San Francisco and New York.

SATA Air Azores and US Airways customers will also be able to check their luggage to their final destination, and receive boarding cards for both carriers, upon check-in with either US Airways within the United States or with SATA in the Azores and/or mainland Portugal.

In 2010, SATA showed the strongest growth of any new scheduled airline at Bosont Logan Airport. The passenger count to and from Portugal and the Azores jumped dramatically. The total last year was 74,419 which was an increase of 21 percent.