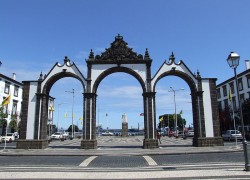 According to João Botelho, manager at American Travel of East Providence, RI,   SATA International is sold out for the upcoming 2011 Festas do Senhor Santo Cristo dos Milagres to be held on May 25-30, in Ponta Delgada.

Passengers wishing to travel to the Azores that week will have to consider different alternatives — said João Botelho — such as travelling through Boston/London/Lisbon or New York/Lisbon.

He said that this year, SATA Air Azores increased its flight capacity by two extra flights from Boston to Ponta Delgada, for the occasion, representing an additional 1,000 seats. According to him no flights will leave from Providence