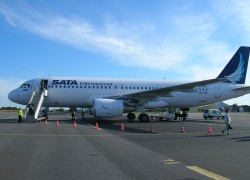 The fuel surcharge airlines add to the price of tickets for flights to Madeira and the Azores rose 47.3 percent, from 19 euros to 28 euros, announced Portugal’s National Civil Aviation Institute (INAC).

Fuel surcharges for SATA Air Azores had already increased from 32 to 34 euros as of March 29, 2011, for all bookings and departures.

The surcharge is a result of current increases in fuel prices.  According to the INAC full surcharges are revised quarterly, depending on the price of jet fuel and dollar-euro exchange rates.  Fuel surcharges to and from the rest of Europe remained unaltered at 34 euros.

Increases in the price of a barrel of oil are passed on to airline tickets and travel packages from airlines and travel distributors.  They represent approximately 35 percent of the cost of the carrier and can be added as surcharges at any time of the year in addition to the ticket price.

All carriers apply these surcharges directly or indirectly.  Fuel surcharges may vary from one company to another for a single journey on the same aircraft.  Different companies may charge different fuel surcharges.  For the most part, this assessment doesn’t require governmental approval to be implemented.

SATA Air Azores is a regional airline based in the Azores.  The airline operates on extensive regional network to destinations across the nine islands of the archipelago.  Its subsidiary, SATA International, operates longer-haul services to Madeira, Europe and North America. SATA International is the only commercial airline operating exclusively between the United States and the Azores.