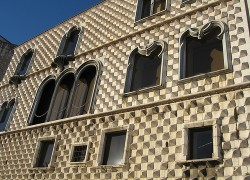 At the time of his death in 2010, Saramago, who was married to Spanish journalist Pilar del Rio, lived on the Lanzarote island in the Spanish Canaries.

Casa dos Bicos, built in in 1523, was donated to the Saramago Foundation by the Lisbon City Council. The 16th century building, now transformed into a cultural center, will house the writer’s papers, his private library and a permanent exhibit of the Saramago’s life. The building, due to open to the public in the spring, will also host cultural events and conferences.

Outside the Casa dos Bicos, Saramago’s ashes are buried under an olive tree that was brought from his hometown. His ashes were also scattered in his birthplace of Azinhaga and in Tias on Lanzarote island.

A documentary of his life “José & Pilar” was chosen to represent Portugal in the 2012 Academy Awards’ Best Foreign Film and Best Song categories.

The Academy Awards also nominated the Fado song “Já não estar” [Being no more], interpreted by Camané  , for the 2012 Oscar for Best Original Song.

The nominations for the 2012 Oscars will be known in January 24, 2012. The 86th Academy Awards Oscars ceremony will be held in February 26, in Los Angeles, California.

José Saramago (1922-2010) was born in the Ribatejo region, mainland Portugal, to a family of farm laborers. He achieved international recognition with his fourth novel Memorial do Convento after it appeared in 1988, in translation, as Baltasar and Blimunda, by Giovanni Pontiero.

He wrote 29 books. His last three books, Small Memories, The Elephant’s Journey and Cain were published posthumously. More than 2 million of his books were sold in Portugal alone and many more worldwide where his work has been translated in 25 languages.