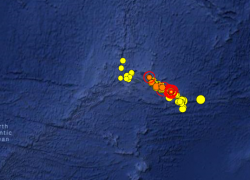 The Center for Seismic-Volcanic Surveillance of the Azores (CIVISA) has alerted the population of the archipelago for seismic activity being significantly “above normal values.”

Authorities in the Azores have alerted the population of São Miguel in particular for ongoing seismic activity on the island, starting September 20, with over 97 seismic events registered on land and at sea of which 8 were felt by the population. No fatalities or destruction were reported.

The epicenter has been located at sea, between 1 and 5 km south of Povoação, off São Miguel island. The seismic events were also felt in Furnas, Ribeira Quente and Água Retorta.

According to CIVISA, the seismic activity has increased in the last two days with at least five major earthquakes felt on land in the Povoação area on São Miguel, two of which of magnitude 5 on the modified Mercalli scale. In addition, 3 moderate seismic events were registered at sea in the Horostella Fossa.