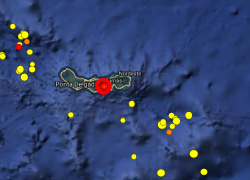 Authorities in the Azores have alerted the population of São Miguel island for the ongoing recurrent seismic activity which they consider to be “above normal values.”

Starting on Sunday shortly before midnight, the tremors continued throughout Monday with multiple recurrent seismic events recorded on the central area of the island. The tremors lasted through the day decreasing in frequency. No fatalities or destruction were reported.

According to the Information Center for Seismic-Volcanic Surveillance of the Azores (CIVISA) the low intensity tremors exceeded 300 with a magnitude range between 1.9 and 3.6. on the Richter scale. The epicenter is located between Lagoa do Fogo and Lagoa das Furnas.

The tremors occurred south and north across the center of the island and were felt with more intensity by the populations of Água de Pau, Povoação (south); and Rabo de Peixe and Fenais da Ajuda (north).

The president of the Government of the Azores, Vasco Cordeiro, remarked Monday that the earthquakes should be watched with caution, but without alarmism.

“It is a situation that is not unprecedented, which naturally inspires the precautions that all Azoreans already know. It should be met with the safeguards that such situation implies, but without alarmism, at least as far as the data we know at the moment,” he said.