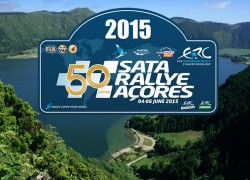 The 50th edition of the SATA Rallye Açores is taking place on São Miguel, June 4-6, with the participation of 49 contenders from 14 countries including 14 top Portuguese drivers .

Launched in 1965, the SATA Rallye Açores counts as round four of the 2015 FIA European Rally Championship season.

The international car racing challenge, featuring 17 special stages covering 216.61 kilometers, has been one of the most important legs in the ground stage of the National Championship.

To mark the 50th running of SATA Rallye Açores, European Rally Cup promoter, Eurosport Events, has increased its privateer prize fund from €20,000 to €50,000, making the Azorean competition a major international challenge everyone in the FIA European Rally Championship looks forward to.

According to a study by the University of Algarve, the event is bringing an estimated €13 million in revenue to the Azores representing a return 13.5 times higher than the investment.

Vitor Fraga, the Azorean Regional Secretary of Tourism and Transport, has remarked that for the Government of the Azores, SATA Rallye Açores continues to be one of the biggest and best events that promotes the Azores globally, thanks to its partnership with Eurosport Events. He said that the Azorean Government will continue to support the rally, as the economic results demonstrate that the investment continues to be beneficial for all.