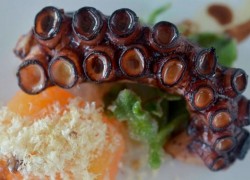 A team of 10 Michelin-starred chefs from around the world are gathering in Ponta Delgada, for the 4th edition of the ‘10 Fest Açores 2015’ taking place June 18-27.

Organized by the local Escola de Formação Turística e Hoteleira (EFTH) [School of Tourism and Hospitality Training], the annual international food festival is one of the largest and most important food festivals in Portugal.

The ‘10 Fest Azores 2015’ event has the participation of 10 world class chefs from Portugal, Spain, France, Belgium, Denmark, the USA and Canada.

Students from the EFTH culinary school are assigned to assist a visiting chef during the festival, creating seven-course dinners prepared by the 10 guest chefs using Azorean ingredients.

Established in 2003, the EFTH culinary school was as created by Associação Açoriana de Formação Turística e Hoteleira (AAFTH) is a private non-profit organization established by the Government of the Azores, the Chamber of Commerce and Industry of Ponta Delgada and SATA Air Azores.

The EFTH has a partnership with the Johnson & Wales University (JWU), Providence, USA which includes the exchange of trainers and trainees with the College of Culinary Arts, in Providence, one of the largest and most prestigious educational institutions on culinary arts in the world, which currently has over 3.200 students.

Besides JWU, every year a group of EFTH graduate students participate during 6 months in an international culinary training program at Walt Disney Resort, in Orlando.

The EFTH is a member of the European Association of Hotel and Tourism Schools (AEHT), an entity with more than 400 members from all over Europe, organizing and participating regularly in international competitions and events that provide important experiences for trainees and trainers.

In the past years EFTH students have won several awards in annual competitions and festivals in AEHT. In 2010 the EFTH established a partnership with the prestigious Alain Ducasse Formation, in Paris, France, organizing annually in Ponta Delgada a week long culinary arts seminar.