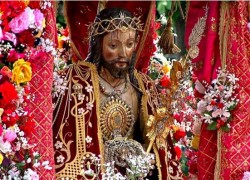 The 2014 Festas do Senhor Santo Cristo dos Milagres, [Holy Feast of Christ of Miracles] is taking place in Ponta Delgada, São Miguel, Azores, starting Friday May 23 through May 29.

The festival is a movable holiday occurring on different dates each year to coincide with the fifth Sunday after Easter.  The event will be broadcast live on RTP/Açores and the Internet.

This year, D. António Francisco dos Santos, Bishop of Porto, will preside to the religious ceremonies together with guest of honor D. Robert Kurtz, Bishop of Hamilton, Bermuda.

According to the 2014 Festivities Program, viewers around the world will be able to watch the main religious events. On Friday, May 23 the Santuário da Esperança illuminations and the Campo de S. Francisco traditional evening event; on Saturday May 24, the outdoor Mass and the Procissão da Mudança; and on May 25, the religious ceremonies, including the traditional main procession, will be also broadcast live on RTP/Açores and online.

Nearly 400 years old, the Festas do Senhor Santo Cristo dos Milagres [Holy Feast of Christ of Miracles], is the largest religious celebration of the Azores and one of the oldest Portuguese religious traditions. The event attracts many thousands of Azorean pilgrims returning home for the festivities.

To watch the main festivities online viewers need to log on to http://www.santo-cristo.com.  In previous years, thousands of views around the world have watched the festivities on television and over the Internet.  For broadcast schedules and details click here.