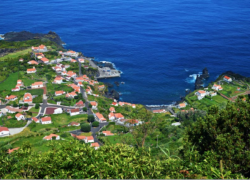 Since Saturday, the island of São Jorge, in the Azores, has recorded more than 1,100 earthquakes, most of them of low magnitude.

Only 63 were felt by the population, prompting authorities to activate an emergency plan as experts assess the seismic crisis.

Most of the seismic activity has occurred in an area between the village of Velas, in south of the island, and Fajã do Ouvidor, on the north coast, informed Rui Marques the director of the Center for Seismovolcanic Information and Surveillance of the Azores (CIVISA).

Indicating that most quakes registered a magnitude less than 3 on the Richter Scale, Marques stressed that the volcanic activity, occurring mostly in the Manadas volcanic fissure system since 4:05 pm on March 19 (Saturday), “remains above the reference values” and that, at the present time, it is still not possible to know the behavior pattern of the current seismic crisis.

“We are monitoring the situation, but it is still too early to have an idea of ​​the pattern that this crisis is following,” Marques explained, adding that CIVISA “will continue to closely monitor all the parameters monitored, maintaining a close relationship with the Service Regional Civil Protection and Fire Department of the Azores,”Lusa news agency reported.

The Civil Protection services said in a statement that it had already contacted local mayors and fire units, asking them to “remain vigilant” and help the people of  São Jorge if needed.

CIVISA will continue to monitor the progress of the situation, issuing new press releases when necessary. Follow the seismic activity live in the Azores in real time here.

Sāo Jorge, one of nine islands which make up the Azores, is home to about 8,400 people and is part of the archipelago’s central group, which includes the popular tourist destinations of Faial and Pico, which are also volcanic.

The Azores are sitting on the so called “Azores triple junction” area where the North American, Eurasian and African plates meet. This area is responsible for frequent geological activity on the islands. The most recent significant earthquake to hit the region in recent years occurred on January 1, 1980. Measuring 7.2 on the Richter scale the quake killed 61 people and injured over 400, causing severe damage on the islands of Terceira and São Jorge. It also shook the islands of Pico and Faial. Periodic volcanic eruptions and earthquake events with occasional tidal waves can have devastating effects on these islands.  All the islands of the Azores are still volcanically active — except Santa Maria — which is farthest away from the Mid-Atlantic Ridge. The last major volcanic eruption occurred in 1958 in Capelinhos on Faial island.  The oldest and most catastrophic damaging quake in the area dates back to 1757, near Calheta, São Jorge island, and measured over 7 on the Richter Scale, killing an estimate 1,500. Earthquakes are classified by magnitude according to the Richter scale: Micro (less than 2.0); Very Small (2.0-2.9); Small (3.0-3.9); Slight (4.0-4.9); Moderate (5.0-5.9); Strong (6.0-6.9); Large (7.0-7.9); Important (8.0-8) 9); Exceptional (9.0-9.9); and Extreme (when greater than 10).

PAJ/Staff/ This is a developing story. Please check back for updates.