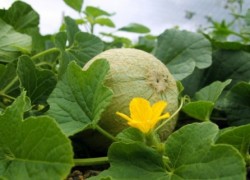 The agricultural cooperative, Agromariensecoop, based on the island of Santa Maria, Azores, has requested the registration of Protected Geographical Identification (PGI) for melons produced on the island.

The objective to establish a trade mark and ensure “the protection and quality” of the product.

According to Ana Cristina Rodrigues, the head of the agricultural cooperative, the application for registration at the Lisbon based Institute of Food and Agricultural Markets PGI, (Instituto de Alimentação e Mercados Agrícolas), started with the publication of an ad which initiated the registration process formally. The next step is to gain international approval by European Union entities with jurisdiction on the matter.

“There are melons produced outside the island which are sold as such,” she said, justifying the initiative with the need to “ensure consumers that their purchase was of a genuine product.”

According to Rodrigues, Santa Maria produces annually about 150 tons of melons, which are sold in the Azorean regional market and in mainland Portugal mostly.

The Santa Maria melon is characterized by “its high content of vitamin C” in the common melon peel, and its richness in minerals such as potassium, magnesium and calcium.

Santa Maria island (population 5,578), belongs to the Eastern Group of the Azorean archipelago. It is the oldest of the nine islands of the Azores, believed to be over 8 million years old. Marine fossils have been discovered on the island which date back to 117 to 130 million years.