Santa Maria: Aerospace Airbus to build base to launch satellites into orbit – Azores 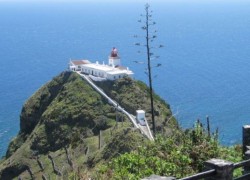 The island of Santa Maria in the Azores is being considered by the aerospace company Airbus as a well-positioned place to build a space base from which rockets will launch small earth satellites into orbit, the Portuguese Minister of Science, Technology and Higher Education, Manuel Heitor, and Minister of Foreign Affairs, Augusto Santos Silva, revealed to the press.

A meeting is being held this Thursday and Friday, on Terceira Island,  to discussed Santa Maria as a future “space port” at the highest level in a project co-sponsored by governments of various countries in cooperation with scientists and the aerospace industry.

The short term goal is to create an Atlantic interaction research center  which will integrate space, climate, oceans and data science through North-South / South-North cooperation, and the management of sustainable energy data and systems.

According to the Minister of Science, this meeting is the result of work in the last nine months, with workshops organized by Portugal in cooperation with other countries namely the United States, China, India, Brazil, South Africa, Angola, Cape Verde, Sao Tome and Principe, Nigeria, Senegal, Spain, France, Germany and the United Kingdom.