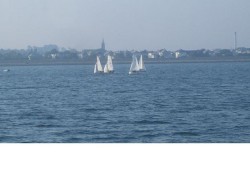 The Azorean Maritime Heritage Society is sponsoring the VII International Azorean Whaleboat Regatta in partnership with the New Bedford Whaling Museum.  The goal of the event is to connect the common whaling heritage of the Azores and New Bedford.

First held in New Bedford in 2004, the competition alternates each year between the New Bedford and the Azores. Three American Beetle wooden whaleboats, donated to the Charles W. Morgan by the Whaling Museum and Mystic Seaport, are competing against the Azorean guest team.

Organizer Victor Pereira told the press that the event will offer locals the opportunity to learn more about the whaling heritage connecting the Azores and New Bedford.  “This interconnection is amazing, and it’s something that until recently was relatively dormant,” he said.

Two sailing teams from the Azorean islands of Pico and Faial are competing against male and female local teams in both sailing and rowing events in using replicas of Azorean whaleboats.

On Sunday, September 8, the Dabney Cup will be taking place. The race was named after the Dabney family, a Boston clan who lived on the island of Faial for seven decades in the 1800s.