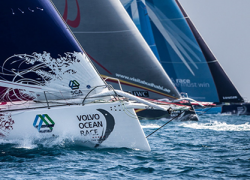 Lisbon, Portugal’s capital, will be the next stopover of the ‘2014-15 Volvo Ocean Race’ – the world’s toughest sailing event.

In its 12th edition, the Volvo Ocean Race is a round-the-world sailing contest, passing through four oceans and five continents, with the participation of seven teams, from 18 countries, including a women-only team.

Racers arrived in Newport, RI, today May 7, from Itajaí (Brazil), completing Leg 6. The race will continue to Leg 7, arriving in Lisbon (Portugal), at Tagus River, on May 25. Departing from Lisbon on June 7, the race completes its Leg 8 in Lorient (France), continuing to Leg 9 in Gothenburg  (Sweden) where it finishes on June 27.

The Volvo Ocean Race carries the name of its current sponsor, Swedish automobile manufacturer Volvo. Presently, the Netherlands holds the record of three wins, with Dutch skipper Conny van Rietschoten the only to win the race twice