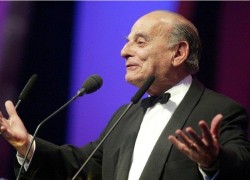 Saraiva was most famous in Portugal and beloved among Portuguese communities around the world, through his television programs “História Essencial de Portugal” and “A Alma e a Gente” on the History of Portugal.

An author, lecturer and diplomat, Saraiva was a member of the prestigious Sciences Academy of Lisbon, Portuguese Academy of History and the São Paulo Historical Institute (Brazil)

Saraiva (below) November 2011:  “No matter what the future holds there will always be moonlight,  Serra de Sintra and the Tagus flowing towards the sea”  – José Hermano Saraiva  (1917-2012)