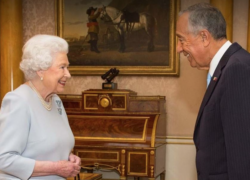 The Council of Ministers, in representation of the Portuguese government, has approved, Thursday, a decree declaring three days of national mourning for the death of Queen Elizabeth II, to take place on September 18th, 19th and 20th.

“Her Majesty Queen Elizabeth II of the United Kingdom of Great Britain and Northern Ireland profoundly marked the second half of the 20th century and the first quarter of the 21st century. Thus, in this moment of a long and deep mourning for our oldest ally, the Government acquiesces to declare national mourning on the 18th, 19th and 20th of September 2022,” the Council of Ministers announced in a prepared statement.

The statement follows remarks by the Portuguese President, Marcelo Rebelo de Sousa, expressing his “most heartfelt and sincere condolences” on the death of the Queen, praising her as an “example to all of courage, dedication, stability and an unwavering sense of public service, as she was throughout her more than 96 years of life and 70 years of reign.”

“It is with deep sadness and immense sorrow that I learnt of the death of Her Majesty Queen Elizabeth II. At this time of mourning and grief, I offer Your Majesty and the entire royal family, as well as all the British people, on behalf of the Portuguese people and on my own behalf, I offer my sincere condolences for the loss suffered,” the President of Portugal stated, in his official website, on behalf of the British people and King Charles III.

Marcelo Rebelo de Sousa also stated that he is “confident in the historic and unbreakable bonds of friendship that unite and will continue to unite Portugal and the United Kingdom, I renew my most heartfelt and sincere condolences,” wishing all the best to King Charles III.

“For Portugal and for all Portuguese people, the visits that Queen Elizabeth II made to our country in 1957 and 1985 will remain in the memory of each of us with unquestionable affection and appreciation. For me personally, I will not be able to forget the honor of meeting her when I travelled to London in 2016,” the President added.

Praising Queen Elizabeth II for her “enormous sense of State” Portugal’s President expressed great admiration for the Her Majesty the Queen by remarking:

“We are used to having a closeness, a great affection and admiration for Queen Elizabeth II, for her courage and sense of State, for her ability to understand with intelligence and lucidity and to adjust to such different worlds.”

As an invited guest, and on behalf of Portugal’s oldest ally, President Marcelo Rebelo de Sousa will attend the funeral ceremonies to be held on Monday, September 19th. Portugal will be also represented by the Minister for Foreign Affairs João Gomes Cravinho.

The relationship between Portugal and the United Kingdom dates to the Middle Ages, when in 1373 England signed the Anglo-Portuguese Alliance, considered the oldest alliance in the world, between two countries, still in force.

Born Princess Elizabeth Alexandra Mary, on April 21, 1926, in London, Queen Elizabeth II came to the throne in 1952, becoming the UK’s longest-serving monarch. She died on September 8th, 2022, at age 96, at Balmoral, Scotland.

Following the funeral ceremonies, led by the Archbishop of Canterbury the Dean of Westminster, the Queen will be buried within George VI Memorial Chapel in Windsor Castle, next to King George VI, Queen Elizabeth the Queen Mother, and the ashes of her sister Princess Margaret. Once there, Prince Philip’s coffin will be exhumed in the coming weeks and transported from the Royal Vault to George VI Memorial Chapel to lie next to her. He died age 99, April 9, 2021.

The President of the United States, Joe Biden, accompanied by first lady Jill Biden, will be among the heads of state traveling to London for the funeral, which will be attended by over 500 foreign dignitaries including, presidents, prime ministers, foreign ministers, and kings and queens from other nations.

The British Embassy in Lisbon has announced that condolence books will be available daily at the British Embassy in Lisbon and at the Vice Consulate in Portimão, Algarve, from 10am to 4pm, until Friday, September 16, for those who wish to express their condolences following the death of Her Majesty Queen Elizabeth II. Buckingham Palace has also made a condolence book available at www.royal.uk

The first visit took place in 1957, during the Estado Novo regime led By António Oliveira Salazar. The second visit was in 1985, after the establishment of democracy.  The two visits marked two important moments in the history of Portugal and the United Kingdom. The relationship dates to the Middle Ages, when in 1373 England signed the Anglo-Portuguese Alliance, the oldest alliance in the world still in force.

In 1957, between February 18 and 20, Elizabeth II disembarked from the Royal Yacht moored in the Tagus River. The Portuguese state spared no expense, buying a Rolls Royce especially for the occasion. The Queen and the Duke of Edinburgh were accommodated at Queluz National Palace, entertained at a banquet at the Palácio Nacional de Ajuda, and visited the Monasteries of Santa Maria, Alcobaça, Santa Maria da Vitória in Batalha, and Nazaré.

On March 25, 1985, the host was President António Ramalho Eanes, who welcomed the royal party outside Lisbon at the 16th century Tower of Belem, where Portuguese explorers set sail on their voyages of discovery in the 1500s. The queen arrived aboard a royally outfitted British Airways jetliner and was later joined her husband, Prince Philip, aboard the Britannia, the royal yacht. The royal itinerary included the Roman temple to Diana, a goddess of the moon, forests and women in childbirth, who shares the name of the queen’s former daughter- in-law Princess Diana.