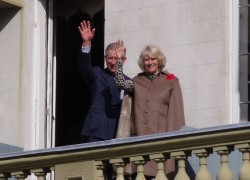 The Prince of Wales and the Duchess of Cornwall visited Portugal this week on a ten-day tour which also includes Spain and Morocco.  The “spring tour” set to begin on March 28th,  was the first the royal couple made to any of the countries as a couple.

In Portugal the royal couple toured Lisbon where among other engagements they celebrated the long-standing co-operation between the two counties and meet representatives from the large resident British community. The President of Portugal, Cavaco Silva,  hosted the visiting couple at a state dinner

The Prince of Wales has made numerous official trips to all three countries in the past but this is the first time the Duchess of Cornwall will accompany him. The tour aims to promote commercial relations, cooperation on climate change and cultural matters.

The Anglo-Portuguese Alliance between England and Portugal, which goes back to the Middle Ages, is the oldest alliance in the world which is still in force.