Rolling Stone Magazine has named Portugal’s national soccer coach José Mourinho their “Rockstar of the Year” for 2011, citing his “controversial message, his brazen intelligence, and above all, the provocative attitude.”

Mourinho, also known as the “The Special One,” appears on the cover of the December 2011 issue of Rolling Stone’s Spanish edition. 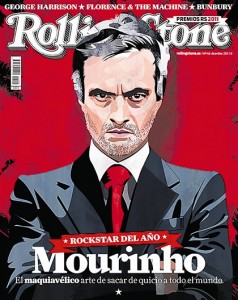 On 28 May 2010, Mourinho signed a four-year contract with Real Madrid. His first honor with the team was winning the 2011 Copa del Rey Final, the first time Madrid had won the competition since 1993.

In 23 March 2009, José Mourinho was awarded a doctorate honoris causa degree by the Technical University of Lisbon for his career accomplishments. He speaks Portuguese, Spanish, Italian, French and English fluently. He also speaks Catalan.

In October 2010, Mourinho was ranked No.9 on the list of “Most Influential Men” published by AskMen.com. A father of two, he has described his family as the center of his life. He was selected as the New Statesman Man of the Year 2005, described as a man devoted to both his family and his work.