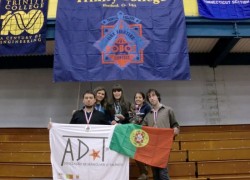 A team of students from the University of Coimbra and the Coimbra Polytechnic Institute won the Gold Medal at the 19th Fire Fighting Home Robot Contest, an international robotics competition held last week at Trinity College in Hartford, CT, USA.