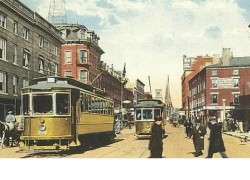 The University of Massachusetts Dartmouth (UMD) Department of Portuguese and Center for Portuguese Studies and Culture announced a lecture – The Book, the Author and the Protest: Revisiting “Two Portuguese Communities in New England (1923),” – by Dr. Cristiana Bastos, an anthropologist and senior researcher at the Institute for Social Sciences at the University of Lisbon. She is also the spring 2013 Hélio and Amélia Pedroso/Luso-American Foundation Endowed Chair in Portuguese Studies at UMass Dartmouth.

In 1924, six thousand Portuguese rallied in New Bedford against the book Two Portuguese Communities in New England, by sociologist Donald Taft of Columbia University.  What made the crowd so angry about a book that most of them had not read? Taft had conducted research in Fall River and Portsmouth in an attempt to explain local high infant mortality rates. Academic journals praised his analytical work, but did not challenge his racialist premises and conclusions regarding the non-whiteness of the Portuguese. However, the communities reacted forcefully in newspapers and public demonstrations where they asked the Portuguese government for a scientific dismissal of Taft’s prejudices.

Analysis of the community upheaval against the author who wrote about them will expand our knowledge of the Portuguese communities and their leaders during the 1920s, and will contribute to the discussion of the racialization of migrants, the production of knowledge about minorities, the politics of labor, and the eugenicist trends of the 1920s.

The lecture will take place on Wednesday, May 1, 2013 at 5:00 p.m. in the Board of Trustees Conference Room located on the third floor of the Foster Administration Building (Parking Lots 5 or 6). Th event is free and open to the public.