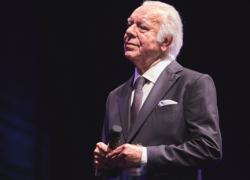 By looking into fado’s past, one can see the future. In fact, the deeper one can see into the past, the further one can see into the future. At their Town Hall concert on 7 April, held as part of the 2018 New York City Fado Festival, Carlos do Carmo and Celeste Rodrigues brought roughly 120 years of combined experience to this deeply traditional yet startlingly innovative music. They marked out decades of experience and commitment that, paradoxically, also spoke to the eternal flexibility of this musical form.

The set list for the first half of the concert would have been intelligible to players from 50 or more years ago. But that is because the setlist specified only the music–with names like fado margaridas, fado Pedro Rodrigues, and fado Vianinha–and not the lyrics. In fado, the music is prime: it serves as a vessel for a seemingly endless and always rejuvenating set of lyrics. Yet the music is also wildly improvisatory–a necessary quality when, in the course of a given evening, a single fado (music) might be performed a dozen times, albeit most always with different lyrics. The enigmatic, fluid pairings between music and lyric keep the fado moving forward, while ensuring that it never loses its historical moorings.

Should he wish to do so, Carlos do Carmo can construct a concert in which every audience member who has been “in” the fado knows every lyric and every music. “Creations” (as fado artists call them) of Carlos do Carmo such as “Duas lagrimas de orvalho” and “Canoas do Tejo” are unmistakably associated with him, but are also part of fado’s DNA. Yet he, and indeed many of fado’s best performers, steadfastly refuse to let this living tradition wither on the vine by performing only greatest hits and crowd pleasers. Instead, every performance is taken on its own terms: here, aided, abetted and sometimes simply provoked by fado’s golden trio of José Manuel Neto (Portuguese guitar), Carlos Manuel Proença (classical guitar) and Daniel Pinto (bass guitar).

Deep into Carlos do Carmo’s first set, a lyric about fado’s evolution (“Nasceu assim, cresceu assim”) and one about lingering hope in the face of mortality (“Por morrer uma andorinha”–sung without amplification) led into a surprise for everyone: two new fados, both so fresh that the singer sang from a lyrics sheet. The first one, in the minor key of the Fado Menor do Porto with lyrics by Hélia Correia, evoked perhaps the strongest dialog of the evening between the singer and the Portuguese guitar. The second, called “Mariquinhas.com”, continued one fado’s longest-running stories, about a woman named Mariquinhas with seemingly infinite problems and life complications. It was a fresh and humorous moment–entirely in line with fado tradition–that somehow perfectly prefigured five fragile and beautiful fados from the indomitable Celeste Rodrigues.

All the works performed by Celeste Rodrigues were, in some sense, about loss and distance, but also about the thin and vital thread of memory linking past to present to future. In “Se alguém me procurar” she asked “If you want to know where I am, ask the wind.” And through Artur Ribeiro’s lyric, “Lisboa”, she sang “When I leave, pray for me Lisboa, for I am going to feel suffering without end, Lisboa.” Throughout her performances, the musicians held her in a long, musical caress, all of their eyes locked intensely upon her. “Meu nome baila no vento” (“My name dances in the wind”), with lyrics by José Luís Gordo, closed her set: “My name is no longer mine/it dances without end/And a name that is yours/journeys with my voice as it sings.”

Carlos do Carmo returned to the stage with “Um homem na cidade” (A man in the city), from the landmark album by the same name. The album is strongly associated not only with its principal lyricist, Ary dos Santos, but also with its stellar guitarist, Raúl Nery–who also spent many years as the main guitarist for Celeste Rodrigues’ sister, Amália Rodrigues. José Manuel Neto, a supremely technical and emotive guitarist, brought sparkling and precise sounds to his performance, like rain on glass. It was a masterful display not only for its singular artistry, but also for the vibrant dialogue it created between guitarist and singer.

This was a moment to think not only about Carlos do Carmo’s and Celeste Rodrigues’ respective places within the fado tradition, but also about the many and varied connections–some stretching back generations–amongst the performers. José Manuel Neto’s mother, Deolinda Maria, was an accomplished singer; Carlos Manuel Proença’s mother, Maria Amélia Proença, is still singing, and of course Carlos do Carmo’s mother was the iconic singer Lucília do Carmo. There are countless such continuities and connections within this music, driven in part by the constant flux of performers across fado houses, by musical collaborations, and by a well-informed, perhaps even obsessive, community of listener-participants.

After a nod to New York and to Frank Sinatra (“Shadow of your smile”), Carlos do Carmo headed for his musical monuments, and to the final songs of his set: “Bairro Alto”, “Canoas do Tejo”, “Gaivota”, “Os Putos”, “Lisboa Menina e Moça”. It’s difficult to convey just how popular and established these songs are. Even thousands of miles from Lisbon, many in the audience knew these fados well enough to sing when Carlos do Carmo called upon them to do so. All the works are “fado canção”–song fado–with verse/chorus/verse structures, unlike “fado fado”, which consists only of stacked-up verses with no chorus. All of them are visual, even cinematic, pieces conjuring Lisbon’s bright sunshine and view to the sea.

It is well known that, at this point in his career, Carlos do Carmo has strict limitations on how often and how long he can perform, but he did acquiesce to one more song for his encore, the serene “Sonata de outono”, with lyrics by Ary dos Santos:

I’ll die on my feet, but I’ll die at my own speed.
My place is with life
And that will only end when I say so.

But this particular end, the end of an evening, was also not really an end. As the performers assembled on stage for their final curtain call, it was possible to glimpse in the shadows many of the generations that had come before, and in the bright lights making those shadows, the generations that were yet to be.

The Portuguese language lyrics to all the above fados, and thousands more, are found on  José Fernandes’  website.