Resurrecting the Brother: The Death of Florbela Espanca – Essay 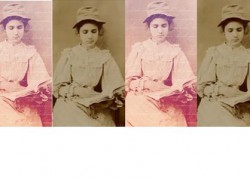 Florbela Espanca (1894-1930) is one of Portugal’s most known and loved poets. She was the illegitimate child of a housemaid and a nondescript father who didn’t acknowledge her until nearly twenty years after her death on December 8, 1930, exactly 36 years to the day of her birth. She is reputed to have been in love with her only brother, also illegitimate, who killed himself by plunging into the Tagus River in a solo flight. This poem, from her book Charneca em Flor, partly expresses her grief.

In Memoriam
To my dear dead brother

In the town of Assisi, “Il Poverello,”
holy, threefold holy, walked preaching
about the sun, the earth, the flower, the gentle dew,
from the sorrowful scourge of poverty.

As much evil as there is, there is that much good.
Everything is our brother! — And thus dreaming
along the roads of Umbria he was forging
the greatest link in the chain of love.

“Regard our brother Sun, our sister Water…”
Ah, Poverello! That lesson was lost
In me like a sail in the sea of sorrow

hit by furious gales!
— I was in life the sister of one Brother only
And now I am sister to no one!  [1]

Agustina Bessa-Luis, in her book, A vida e a obra de Florbela Espanca, says that in the summer of 1930, Espanca’s “poetic force, as well as her vital force, was exhausted” (p. 163). Rui Guedes sees the death of Apeles, Espanca’s only brother, as at least the indirect cause of her deterioration and suicide less than four years later: “The death of her brother was, for Florbela, the greatest shock of her life. Never again did she sleep tranquilly. Never again did she laugh. Never again did she stop mourning. It was the beginning of the end” (Acerca, p. 65). The facts of Espanca’s life are well known, and the rumors, such as that she and her brother had an incestuous relationship, have not been disproved. However, in a letter Espanca wrote to her father two months after her brother’s death, she shows a more maternal than incestuous attitude toward Apeles: “It is true, father, our boy, our dear little boy, has died” (Acerca, p. 66).

Most of Espanca’s work, however much it expresses her tortured soul, was hopeful. However, her oeuvre contains a number of poems expressing final abandonment of hope and welcoming her own death. This unnaturally calm welcoming of death is related to the final shock of her brother’s death, also presumed suicidal. In particular, Espanca abandons, in certain poems, the desperate but paradoxically hopeful theme of a tormented loneliness unrelieved by anyone’s hearing her. Instead, she relinquishes hope for her own life in expiation for her inability to save (be a mother to) Apeles.  With her own suicide, Espanca created an acceptable identity for herself as the sorrowful Stabat Mater, In place of the transgressive speaking woman who cried out to be heard.

Espanca’s marriage to her third husband, Mário Lage, with whom she seemed happy and able to relate as part of a normal family, threatened Apeles, unable to forge a normal relationship himself and unable to bear the “loss” of his mother/sister. These feelings were made worse by his sister’s response to his threat of suicide: “I can do nothing, nothing, nothing for you, and it is this that afflicts me most, desolates me, shames me like cowardice, as if you screamed for help and I didn’t even extend my arms to you” (qtd. in Bessa-Luis, p. 123).

The fact of Espanca’s emaciated condition at the time of her death suggests the erasure of a corporeality characteristic of her early work. Frequently, through verbs associated with orality, such as the wailing and weeping in “A Minha Dor” (p. 67), she expresses an inarticulate but distinctly physical appeal to be heard and a profound loneliness in the answering silence:

In contrast, “A Um Moribundo” (p. 171), from Charneca em Flor (1931), suggests complete reconciliation and even a welcoming of the loneliness of the grave:

Do not be afraid, no! Quietly,
as night falls asleep in the autumn,
close your eyes, simply, sweetly
like a sleepy dove in the afternoon…

The head reclines slightly
and the arms are left to abandonment
as fall, laboring toward the setting sun,
the wings of a sleepy dove…

What’s next? An after?… The blue of the skies?
Another world? The eternal nothing? God?
An abyss? Punishment? Shelter?

Similarly, in “A Uma Rapariga” (p. 210), also from Charneca em Flor, Espanca uses laughter as a sign of transcendence of death (and of transgression), and paradoxically succeeds in affirming life:

To A Young Girl

Open your eyes and face life! Fate
must serve you! Overreach your bounds.
Build high bridges over sloughs,
With your precious girl’s hands.

On this life’s enticing path, walk on
beyond the mountains. Bite into fruits,
laughing! Drink from the fountains!
Kiss those to whom luck binds you.

Let your earthy hands, lovingly,
From the grace of your willowy young body,
raise to the light the stem of a flower…

However, in “A Um Moribundo” (p. 171), from the same book, one finds a strong renunciation of life and an overt death wish.

Do not be afraid, no! Quietly,
as night falls asleep in the autumn,
close your eyes, simply, sweetly
like a sleepy dove in the afternoon…

The head reclines slightly
and the arms are left to abandonment
as fall, laboring toward the setting sun,
the wings of a sleepy dove…

What’s next? An after?… The blue of the skies?
Another world? The eternal nothing? God?
An abyss? Punishment? Shelter?

Espanca’s final acceptance of her own death is shown in “X” (p. 223),  the last of a series of ten poems in Charneca em Flor. The poem was written two months before her death by suicide:

I wanted the stars higher,
space wider, the sun more creative,
the moon brighter, the sea larger,
the waves more hollow and beautiful;

And to open my arms and live life,
— the deeper and gloomier the descent
the higher the never ending ascent.

And the task finished, to sleep
one day, at peace, happy,
serenely as a child sleeps in his crib.

All of her former exuberance, as listed in her desires, is negated by the use of the past tense, suggesting a denuding of all the illusions of her youth that kept her hope alive. The same strong appeal to Death to take her is expressed in the poem, “À Morte” (p. 260), from Reliquiae (1931):

Death, my lady Death
So good thy embrace must be!
Languid and sweet as a sweet snare,
and like a root, serene and strong.

There is no evil that you don’t heal or comfort
Thy hand guides us step by step.
In thee, inside thee, in thy lap
there is no sad fate or bad luck.

Lady Death of velvet fingers,
close my eyes that have seen everything!
Press my wings that have flown so much!

I came from Moriama, the daughter of a king.
Bad magic enchanted me and here I stayed
awaiting you . . . break the spell!

Guedes observes that Espanca was born, married (for the first time) and died on December 8, “the day of Our Lady of Conception, patroness of Vila Viçosa” (Florbela and Apeles’ home town). December 8 is also mother’s day (Acerca, p. 79). He emphasizes the hour of her suicide, which, according to sworn testimony to him, was 2:00 a.m. on December 8, the same hour that she was born in 1894 (Acerca, p. 79).

In many of her poems Espanca sought life. This desire is stated in the first entry of her diary: “When I die, it is possible that someone . . . leaning with a little pity, a little understanding . . . [will] realize what I couldn’t: understanding me” (Obras, 4:124). Through her brother’s death, Espanca finally created an acceptable identify as afflicted mother expiating the death of her brother/son.

(*) Billie Maciunas graduated from Brown University with a degree in comparative literature and from the University of North Carolina in Chapel Hill with a Ph.D. in Comparative Literature. Her Master’s Thesis is on Florbela (Reading Florbela Espanca: The Imaginary of the Mother) and the doctoral dissertation is on modernist Brazilian poet Ana Cristina César. Maciunas lives in Altamonte Springs, Florida writing poetry, translating, and teaching.