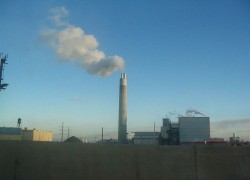 Portuguese research scientists discovered a positive link between the levels of chlorine in the atmosphere and childhood leukemia.

The research was conducted by Maria do Carmo Freitas of the Technological and Nuclear Institute, in Sacavém, Portugal, and statistician Maria Martinho of the Department of Economic and Social Affairs at the United Nations Headquarters, in New York.

The two scientists found that higher levels of chlorine-containing chemicals in the air can be linked to greater instances of the cancer.

Freitas and colleague have investigated the correlation between atmospheric pollution levels of 22 chemical elements, including arsenic, nickel, lead and mercury, as gleaned from an analysis of lichens used as biomarkers of these pollutants and looked at the leukaemia deaths in 275 counties across Portugal.

Industries related to the emission of carcinogenic chlorine compounds and/or carcinogenic compounds, which easily react with atmospheric chlorine, were pointed out as potentially inducing this association.

The study was published in the current issue of the International Journal of Environment and Health.