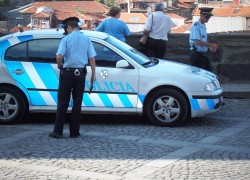 Violent and serious crime in Portugal was down 9% in the first half of this year from the same period of 2011, according to official figures.

The country’s three main police forces registered 1,080 fewer cases of such incidents, while crime in general was also down 1.1%, with 2,121 fewer cases reported.

The figures were the subject of a meeting of the Security Coordinating Office (GCS) on Wednesday, attended by the minister for home affairs and the justice minister, as well as police and secret service officials.

In a statement, the GCS noted that the main drop in general crime was car theft, down 1,091, while there were 695 fewer muggings. Overall, crime dropped in Braga, Viana do Castelo, Leiria, Porto, Setúbal and Lisbon districts, though it rose in five others.

After the meeting, the home affairs minister told journalists that the “very positive” results were thanks to the work of police forces.

Crime in Portugal is characterized by low levels of gun violence and homicide, compared to other developed countries. Crime statistics are compiled annually by the Portuguese Ministry of Internal Administration and the Polícia de Segurança Pública which represents crimes reported to the police.