Report: Portuguese lost 20% of its active population to migration – Portugal 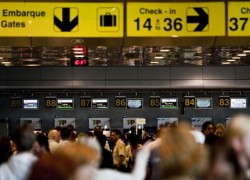 The data, according the “Portuguese Emigration Factbook”, a report issued by observatorioemigracao.pt, reveals that in 2013 alone over 110,000 Portuguese citizens left the country to settle in 16 different countries, the majority of them to 10 in European countries, the most to them settling in the United Kingdom (30,121), Switzerland (20,039), France (18,000) and Germany (11,401). In Africa, Angola received 4,651 Portuguese migrants and Mozambique 3,759.

The study has also revealed that the Portuguese immigrant population in the United States is aging and declining due to a substantial reduction in the number of Portuguese migrants entering the country. Of the total Portuguese population and their descendants in the United Sates, 60% are concentrated in California and Massachusetts. Of those, 37% live in the New England states of Massachusetts and Connecticut; 37% in the Mid-Atlantic states of New Jersey and New York; and 15% in the Pacific region states of California and Hawaii.

The study has also concluded that after France (588,276) and Switzerland (194,940) the United States is the third country in the world with the largest Portuguese born population (1% of its total migrant population) and that about over a million Americans are of Portuguese descent.

Correction – The first paragraph has been corrected to better describe the statistical information included in the Portuguese Emigration Factbook – 2014. The complete study is available in the link below.