Report: Portugal ranks high as best country to be a mother – Save the Children 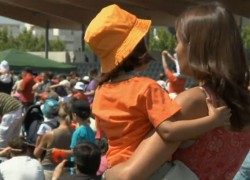 Portugal ranked 15th on the index of best countries to be a mother, down from 14th last year, according to the 13th annual State of the World’s Mothers report released Tuesday by the aid organization Save the Children Foundation.

The report shows the toughest and the best countries to be a mother in the world, in 2012, by examining the well-being of mothers and their children in 165 countries, of which 122 are in the developing world.

Based on range of indexes, including mothers’ education alongside with health and nutrition of children, infant mortality and breastfeeding rates, the report emphasizes nutrition as a key factor in determining mothers and their children’s well-being.

According to the report, Portuguese mothers are allowed 120 to 150 days of maternity leave which include  80 % to 100% of paid salary and about 90% of mothers breastfeed.

Norway tops the list of best countries to be a mother  followed by Iceland, Sweden, New Zealand and Denmark. Finland, Australia, Belgium, and Ireland. The United States ranks 25th on the index, up from 31st last year, while Canada ranked 19th. Niger, in West Africa, is last one on the list.

The United States is the only economically advanced country where employers aren’t legally required to provide paid maternity leave, and almost two thirds of babies are not breastfed exclusively after three months.

Save the Children’s recommendations include helping more women in developing nations breast feed.  “Our research shows that a mother’s breast milk — one single nutrition intervention — can save a million children’s lives a year,” said Save the Children Chief Executive Carolyn Miles.