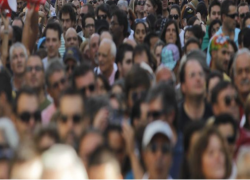 Portugal, which ranks fourth in the Gini index (the indicator that measures world income inequality), ranks first in the inequality indicator reported by Morgan Stanley, exceeding the United States and many countries in southern Europe, namely Italy (second place), followed by Greece and Spain.

Countries with lower levels of socio-economic inequality indicators are the northern European countries of Norway, Sweden and Finland.

Currently, Portugal accounts for less than 2% of the Eurozone GDP, holding the highest combined debt burden in the Eurozone.

Since 2011, with unemployment currently at 12%, almost a half million people have emigrated from Portugal in search of work in Europe, Brazil, and the Portuguese-speaking former African colonies.

Recently, the Bank of Portugal, Portugal’s central bank, has projected that economic growth rate will reach around 1.6 percent in the coming year, less than the 2.5 to 3 percent minimal requirement to prevent Portugal’s fragile recovery from stalling.