Report: Population increased for the first time in 10 years – Portugal 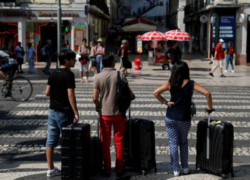 For the first time in 10 years, the Portuguese population has increased 0.19 percent in 2019, compared to 2018, thanks to immigration, the National Statistics Institute (INE) reported today.

In 2019, therefore, there was a positive crude rate of net migration of 0.43% and a negative crude rate of natural increase of 0.25%, in the latter case for the eleventh consecutive year, with greater expression in Área Metropolitana de Lisboa, Centro and Norte regions.

These three regions, together with Região Autónoma da Madeira, were the only ones which contributed to the population increase in 2019.

Região Autónoma dos Açores recorded the lowest ageing ratio (97.2 elderly people per 100 young people), remaining the only region where the number of younger people exceeds the number of elderly.

It is estimated that 2,310,000 Portuguese nationals live abroad, and that an estimated 5 million make the Portuguese diaspora, approximately one the of the total population.

Fall River (MA), with a total population of 95,072, remains the city with the highest proportion of ethnically Portuguese residents (43.9%)  in the United States.