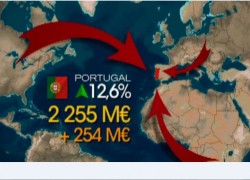 Data from the Bank of Portugal has revealed that remittances from the Portuguese living abroad have increased 12,6%, between January and October of 2012, accounting for a total of € 2,254 million, representing € 253 million more over the same period of 2011.

Data from the Bank of Portugal also revealed that remittances from immigrants in Portugal to their countries of origin has accounted for €437 million. Brazil is the largest beneficiary, receiving €190 million, followed by France with €170 million. Remittances to China came second, followed by Ukraine.