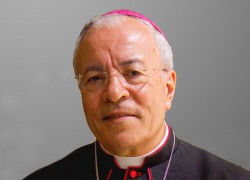 Pope Benedict XVI elevated D. Manuel Monteiro de Castro, 73, to the prestigious College of Cardinals in an elaborate ceremony at the Vatican on Saturday.

Born in Santa Eufémia de Prazins, Guimarães, mainland Portugal, D. Manuel was elevated to the position along with 21 other new cardinals, including Archbishop Timothy Dolan, the head Archdiocese of New York,  and Archbishop Edwin O’Brien of Baltimore.

At the Vatican since 2009, D. Manuel was appointment by Benedict XVI, in January 2012, Major Penitentiary of the Apostolic Penitentiary. Previously, he had served as Vatican’s secretary of the Congregation for Bishops.

The College of Cardinals is best known for forming the assembly that names the new pope. With the new appointments, there are 125 cardinals eligible to vote for a new pope and 214 total cardinals. Cardinals who are over 80 years old are not allowed to vote.

Ordained priest in 1961 he was elevated to bishop in 1985. He is the third Portuguese appointed cardinal with, namely, Cardinal Emeritus D. José Saraiva Martins and D. José Policarpo the Cardinal of Lisbon.

In 1985 D. Manuel Monteiro de Castro was appointed archbishop and pro-nuncio to the countries in the West Indies that have diplomatic relations with the Holy See, including The Bahamas, Barbados, Belize, Dominica, Grenada, Jamaica, Saint Lucia and Trinidad and Tobago, and apostolic delegate for the other territories, such as the Turks and Caicos Islands and the Netherlands Antilles.