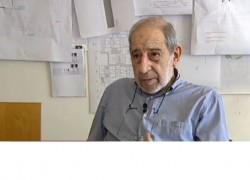 Design work by Portuguese architect, Siza Vieira, is now available in an application for iPad, launched by the App Store worldwide.

A reference for architecture and design, Siza Vieira, 80, is one of the most renowned Portuguese architects and one of the great living figures of contemporary world architecture.

Álvaro Siza Vieira was born in 1933, in Matosinhos, mainland Portugal. He began his professional life in 1955, after graduating in the Fine Arts School of Porto. His artistic talent was more rapidly recognized abroad than in Portugal, especially through the assignment of works such as the restoration of the Jewish neighborhood in Venice and of the Kreuzberg neighborhood in Berlin. Among his more innovative works at the time stand out: Casa de Chá da Boa Nova and Leça da Palmeira Swimming Pool, Marco de Canaveses Church, Pinto & Sotto Mayor Bank Agency in Oliveira de Azeméis, and also the modern art centres of several European countries, such as Centro Galego de Arte Contemporánea and the Journalism Faculty, both in Santiago de Compostela.

He was awarded many prizes: in 1988 by the foundations Alvar Aalto and Mies van der Rohe; in 1992 the Pritzker by the Foundation Hyatt from Chicago; in Portugal, the Secil Award for Architecture in 1996 and 2000, for the restoration of the Castro e Melo building in the Chiado area and for the project of the Information Sciences Faculty in Santiago de Compostela; the Golden Lion of the Venice Biennial for best project of the International Exhibition in 2002 and the Golden Lion for Lifetime Achievement in 2012; in 2002 the Arts International Medal by the Madrid Regional Government for the revitalization of the city center, among many others.

For more information regarding Vieira’s iPad application, as well as Vieira’s texts about his design work and an exclusive interview with him >> download >>