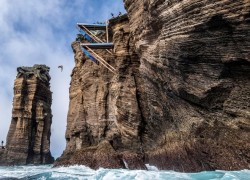 For the fifth consecutive year, 22 world class cliff divers from 9 countries are gathering in São Miguel, Azores, to participate in the second stop of the 2017 International Red Bull Cliff Diving World Series. This year’s competing divers include women and men. 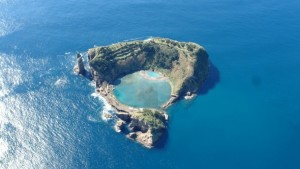 The extreme sports competition is being held July 8-9 at the Ilhéu de Vila Franca do Campo, an islet offshore São Miguel island. Previous competitions were held on the islet in 2012, 2013, 2014, 2015, and 2016. The location has been proved to be a tournament favorite.

Divers will leap from two platforms placed 27 and 21 meters above the Atlantic Ocean to take a free fall, achieving speeds of approximately 85kph. The challenge creates a special thrill for the athletes and the spectators.

The event “promises to show the most complex and exuberant jumps of the modality proposed by FINA (International Swimming Federation/Fédération Internationale de Natation) for the Olympic Games of 2020”, according to the organization.

Established in 2009, the Red Bull Cliff Diving World Series is an extreme sport annual challenge created in 2009 by Red Bull. Five international judges score each dive based on a scale of zero to 10 in half-point increments.

The event will be LIVE on July 9 from 12.30 local time (12.30 GMT) on www.redbullcliffdiving.com Red Bull TV and Facebook.