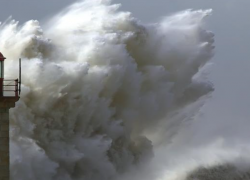 The archipelago of the Azores was once again placed under a weather “red alert” for Friday, the highest of a four-scale alert system, described as a “situation of extreme risk.” It is the second time this week that a weather red alert was issued for the islands.

According to the Portuguese Institute of Sea and Atmosphere (IPMA) for Friday, extreme weather conditions will return with thunder storms, rain and 100-130 km/hour winds (stronger for the islands of Terceira, Pico, São Jorge, Graciosa and Faial) and sea waves expected to reach 8-10 meters high.

Last Monday, the Government of the Azores had declared a state of emergency due to a complex weather system involving thunder storms, hurricane strength winds coastal erosion and flooding.

One man, 51, was killed in São Roque, São Miguel, after being hit by a wave during the storm. The extreme weather caused many rescue operations involving individuals and vehicles with16 people left homeless.

During the storm French solo sailor, Paul Meilhat, was airlifted near 50 miles north of São Miguel, and taken to hospital on the island of Terceira. He had suffered a fractured pelvis and fractured rib while doing a sail change and being thrown across the boat, injuring himself.