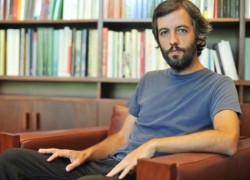 The University of Massachusetts Dartmouth Center for Portuguese Studies and Culture, Department of Portuguese, the MA & PhD Program in Luso-Afro-Brazilian Studies and Theory and the Ferreira-Mendes Portuguese-American Archives announce a book talk by novelist Jacinto Lucas Pires scheduled for Wednesday, November 20, at 12:00 noon.

The event, free and open to the public, will take place in the Prince Henry Society Reading Room at the Ferreira-Mendes Portuguese-American Archives located in the Claire T. Carney Library, parking lot 13.

The author will read from his award-winning novel, The True Actor (DISQUIET, 2013), translated by Jaime Braz and Dean Thomas Ellis. The novel tells the story of Americo Abril, a down-on-his-luck actor who is confounded by the various roles that he plays in real life—weary dad, blocked artist, henpecked husband, miserable lover—and the role he lands in the avant-garde film Being Paul Giamatti. The True Actor manages both a postmodern boondoggle and a touching story of identity and love and loss in austerity-era Portugal.

Jacinto Lucas Pires was born in Porto in 1974 and now lives in Lisbon. He is a writer, playwright, director, musician, and soccer aficionado. The True Actor won the 2013 Distinguished Literature award of the DST (Domingo da Silveira Teixeira) organization for the best book published in Portugal in the past two years. Pires won the prestigious Prémio Europa-David Mourão-Ferreira (Bari University, Italy/Instituto Camões, Portugal) in 2008. He plays with the band Os Quais, and his soccer column appears in Jornal de Notícias. Several translations of his short prose recently appeared in an issue of The St. Petersburg Review translated by Jaime Braz and Dean Thomas Ellis.

Jaime Braz was born in 1958 in Luanda, Angola. He has a degree in Biology and teaches at a high school in the Portuguese town of Covilhâ, where he lives with his wife, son and dog. His paintings have been exhibited in Portugal and abroad and featured in the Russian edition of Esquire magazine. His short fiction has appeared in the St. Petersburg Review.

Dean Thomas Ellis is a writer and translator living in New Orleans. His work has appeared in Bloodroot, Bedtime Stories, St. Petersburg Review, KGB Bar Lit Journal, and in the online series Working Stiff at PBS.org. He hosts the radio programs Tudo Bem and The Dean’s List on WWOZ-FM 90.7 in New Orleans and online at wwoz.org.

“The True Actor is a true pleasure–wise and funny with a subtle gravity and a wild hallucinatory streak. It brilliantly examines the state of a nation through one man’s state of mind. Jacinto Lucas Pires is a powerful voice in modern fiction, charming, fearless, flourishing at the crossroads of the playful and the dire.” –Sam Lipsyte, author of The Fun Parts and The Ask

“Politically conscious, cinematic, and everything else that is characteristic of the literature of Lucas Pires, all absorbed into and shaken out in a game of conscience in which he holds all the cards. And this book is his royal flush.”
–TimeOut Lisbon

“Jacinto Lucas Pires’ third novel is a powerful political and social commentary, rooted in the character of a young actor steeped in the reality of his country’s current crisis.”
–Espresso